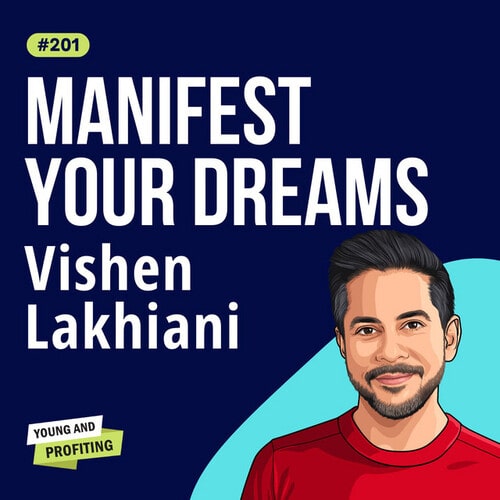 Vishen Lakhiani was once an insecure, pimply kid who was plagued with low self-esteem. After discovering the Silva Method of Meditation, Vishen learned to unlock the power of his mind and become one of today’s most influential gurus in personal growth and human consciousness. In today’s episode, Vishen uncovers the power of intuition, his 6 phase meditation practice, and the levels of personal growth to help listeners make the impossible possible!

Vishen Lakhiani is a New York Times Best-Selling author and founder of Mindvalley, an education tech company that gives the benefits of an Ivy League education for 1/100th of the price. Vishen’s latest book, The 6 Phase Meditation Method, aims to help people supercharge their minds, manifest their goals, and make magic just in minutes a day.

In this episode, Hala and Vishen will discuss:

– How Vishen discovered the power of the mind

– The Silva Method, the “tex mex” of meditation

– Why most people figure life out at 38 years old

– How to start trusting your intuition

– Why the universe “gives you what you are”

– Debunking the law of attraction

– The 4 levels of personal growth

– Why the most successful CEOs have altered state practices

– How to find a useful meditation practice

Vishen Lakhiani is an entrepreneur, author, and activist on a mission to raise human consciousness. He founded Mindvalley in 2003 with the goal of bringing together the world’s top educators under one platform to usher in a new era for humanity that is more empowered, connected, and collaborative than the status quo. Under the Mindvalley umbrella, he has launched a variety of learning tools and platforms that have helped millions around the world experience personal transformation.

Vishen is constantly traveling around the world, meeting brilliant minds, speaking at conferences and corporations, and filming content. Some of his most insightful interviews are on his Mindvalley podcast. In his latest book, The Six Phase Meditation Method, Vishen unlocks the secret weapon of the world’s top achievers: his signature hyper-efficient meditation program that anyone can make time for.

Shopify – Sign up for a free trial at shopify.com/profiting

Invesco – Discover the possibilities at Invesco.com/ETFSolutions

Omaha Steaks – Visit OmahaSteaks.com and get 50% off sitewide plus use promo code YAP at checkout to get that EXTRA $40 OFF your order

The Jordan Harbinger Show – Check out jordanharbinger.com/start for some episode recommendations

More About Young and Profiting